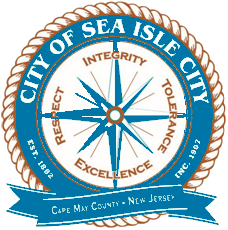 Upcoming City Meetings view all
Message from the Mayor - September 28, 2022

“On today’s agenda, there’s a few items that bear mentioning...

Two resolutions before council today will authorize a state contract and user agreement for the city to move all police, public works, and first responder radio communications into the state of New Jersey Interoperable Communications System. This is a roughly one million dollar contract that will enable all first responders to have the most current technology to ensure communications among various jurisdictions from local to county to state and federal. I want to thank the police department for spearheading this effort over the past couple years; and I want to thank city council for funding this critical project.

Also on today’s agenda is a resolution authorizing advertisement of bids for demolition of the former school building on Park Road. This is another step forward towards the eventual construction of the community center that we’ve been planning together, as a community; and which will serve the entire city as a gathering place for people of all ages to enjoy all of the city’s recreation and leisure programs and activities.

Another agenda item today is a resolution to confirm Chief Anthony Garreffi as the director of the police department. As we all know, Chief Garreffi was already appointed as the chief of police. Today’s action will formalize the chief’s position as department head, which in addition to police operations, includes responsibility for management of emergency medical services; the beach patrol; the office of emergency management; the City marina; and civilian traffic maintenance and lines and signs operations. In addition, as director of the department, the chief is the city’s primary point of contact with the volunteer fire department.

Finally, I want to follow up on a matter that was raised at the last council meeting - beach access. Specifically, making our beach access better and easier - especially for those with limited mobility. A good thing that has occurred over the past decade is the strengthening of our shore protection. That’s also meant larger beaches on most of the island. We’ve done a lot of work to make the pathways over our dunes easier; but we must do more. Quite frankly, the challenge is the availability of seasonal labor. The acquisition of beach access materials is simply a matter of funding – and we have consistently allocated the required funds and obtained the necessary materials. Getting and retaining seasonal employees has been increasingly difficult over the past several years. Despite this, we will overcome this challenge. This administration is committed to ensuring that access to our most treasured natural resource is available to all members of our community.

Once again, please remember that we are one Sea Isle City and together we’ll be stronger than ever.”

At the start of the September 13 City Council meeting, Mayor Desiderio announced the names of the winners in his Beach Tag Art Contest, which included Claire Konrad (Seasonal Beach Tag), Kevin Andrews (Saint Patrick’s Day), Mason Corey (Veterans) and Emleyn Costello (Winter/Holiday). City Council congratulates all of the children who created the winning designs – and we applaud all of the young artists who participated in the contest.

Following the Mayor’s comments, Business Administrator George Savastano updated City Council on the sales figures for 2022 Beach Tags, which totaled $1,319,855 as of September 13, which was slightly lower than 2021 total sales figures.

Following the Business Administrator’s report, each of the resolutions on the September 13 Consent Agenda was approved, including…

• Resolution 162, which approved the latest vouchers for the City’s Finance Office (this is a usual procedure that is required for all City purchases).

• Resolution 163, which authorized a labor contract between the City and the Fraternal Order of Police Lodge #7 Rank-and-File through December 31, 2023.

• Resolution 164, which authorized a purchase order for general maintenance / streetscape repairs near the intersection of Landis Avenue and JFK Boulevard, with Capital Concrete, of Elmer NJ, in the amount of $11,225.

• Resolution 165, which authorized a Purchase Order for Chlorine Analyzer Repairs at Water Well #8, with Complete Control Services, of Egg Harbor City, NJ, in the amount of $3,226.13.

• Resolution 166, which authorized the purchase of the front-half and back-half of a garbage truck through a National Co-Op, from Hunter Truck, of Clarksburg, NJ, and Gran-Turk, of Bridgeport, NJ, totaling $263,961.

• Resolution 167, which designated a city-owned Honda Foreman 4WD ATV as surplus and authorized its sale online.

• Resolution 168, which authorized the award of a contract for infrastructure improvements along Sounds Avenue, with Mathis Construction Company, in the amount of $898,061.

During the “Citizen Comment” portion of the September 13 meeting, several property owners stepped to the microphone to share their comments and concerns, which included a request for additional beach access mats on Sea Isle’s dune paths, residential parking issues, drainage, and vehicles not obeying the speed limit in Sea Isle’s south-end.

Our next City Council meeting will take place on Tuesday, September 27, at 10:00 AM in Council Chambers. –We hope to see you there!